Normally a road surface can be considered to slope in two directions – longitudinally , in the direction of the centreline of the road, and transversely, at right angles to the centreline of the road. This post discusses  the transverse slope of a road. Several different terms are used to describe the transverse slope. They include camber, crossfall, superelevation, cant and cross slope. Some definitions (from ref. 138):

Basically, the terms all refer to the same thing. In fact one reference (ref. 1037) refers to superelevation, cant and crossfall in the same breath. Depending on which standard you look at, the  crossfall can be designed to fall from the edge of a carriageway to the centre median, can vary with each lane across the width of one carriageway on a dual carriageway road, and can vary constantly, with the road surface taking the shape of a parabolic curve.

There are therefore three sub-aspects of crossfall  which could be looked at: minimum values, maximum values, and direction of the crossfall. The remainder of this post looks at minimum crossfall.

Suppose we have a one-lane road with travel restricted to one direction. The simplest design would be for the road to have a flat, horizontal surface. However , rainwater will not drain off of this road surface, and there will be the risk of ponding during rain. So the road surface has to have a minimum slope for drainage purposes.

The following table gives examples for some of these features: 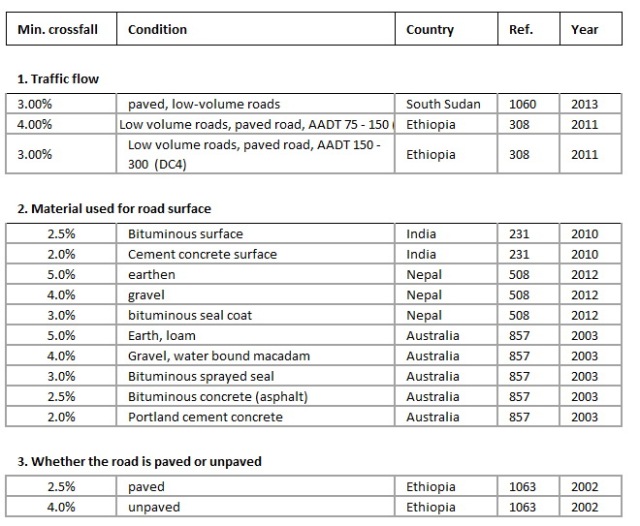 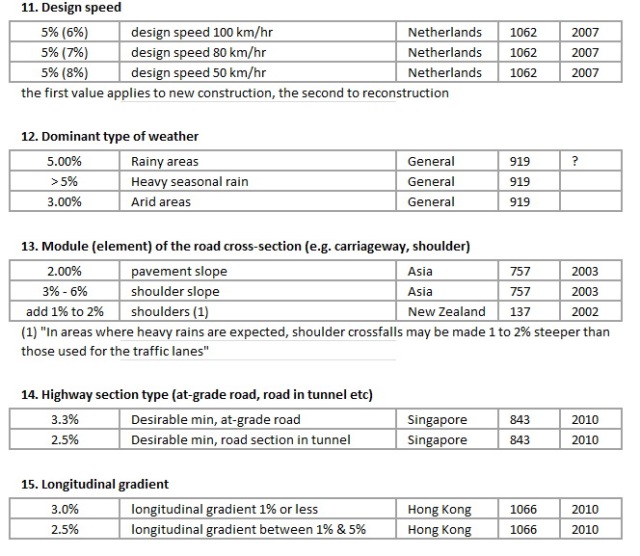 Most or all of the 15 features listed above probably do (that is, should have) an impact on the choice of minimum crossfall. In this case, surely any self-respecting guideline on highway geometrics would include them. In fact it is difficult to see any consistency between different design guidelines as to the features they do / do not include;  and what makes life more difficult is that the points which a particular guideline does include are often in different pages and chapters of the document. There is also the problem that  in many countries there exists a jungle of guidelines, manuals, and papers, which partially contradict each other, which may or may not be up to date, and for which there is no overview.

Maybe university departments could produce an overview of their country’s guidelines, with an indication of which are still relevant.

831  USA, A policy on the geometric design of highways and streets; AASHTO, 2011

Robert Bartlett is an international consultant with over 30 years of professional experience as a highway and traffic engineer with leading companies and organisations in several countries, including Germany, China (Hong Kong), Qatar and the UK. Specialised in urban studies, transport and the use of GIS, research has included new ideas on subjects such as the study of social justice using GIS, the dimensions of vehicles, and comparative geometrics (highways and transport).
View all posts by roadnotes →
This entry was posted in basics, highway design standards, roads and tagged crossfall, highway engineering, highway geometric design, highway geometrics. Bookmark the permalink.